How do women become pioneers in the arts? How do they shine apart from their male colleagues? Eight delightful children’s books hold valuable lessons that make art more fun for aspiring female artists.

American ballerina, Misty Copeland, a pioneer in her own right, recently made headlines flawlessly recreating some of Edgar Degas’s famous ballet paintings. A pairing of female and male artistic giants is not unusual: Degas and painter Mary Cassatt, for example, were friends for years. Other examples include Mexican painters Frida Kahlo and Diego Rivera as well as painter Georgia O’Keefe and photographer Alfred Stieglitz. But how do female artists come to shine apart from male colleagues and gain the spotlight for themselves?

Copeland, of course, is already famous in her own right (see the 2015 documentary, A Ballerina’s Tale). She also wrote an award-winning picture book, Firebird, for any girl whose confidence is fragile but who also yearns to reach the heights Misty has.

Drum Dream Girl: How One Girl’s Courage Changed Music, by Newberry honor winner Margarita Engle and illustrator Rafael Lopez, tells the fascinating story of Millo Castro Zaidarriaga. In 1932 she broke through a Cuban traditional belief that only boys should play drums. She played alongside the greats of American jazz and became a world-famous musician. The text is a poem that paints captivating word images. The illustrations capture her father’s initial disapproval, her dreams, her actions to keep her dream alive, and her father’s eventual transformation. The illustration that moved me the most was a two-page vertical spread of Millo looking up at the ceiling where a bird cage holds a trapped bongo drum with wings. Great book!

Capturing Joy – The Story of Maud Lewis, written by Jo Ellen Bogart and illustrated by Mark Lang, gives the fascinating story of a Canadian folk art painter who was born with birth defects, was poor, and lived with rheumatoid arthritis. Maud Lewis married a fish peddler. In the home where they lived there was no electricity and no indoor plumbing. The book is about her self-determination to overcome these obstacles and create images of joy. Unlike the instant fame that Hollywood portrays, the book shows that Lewis became famous slowly (a message I think valuable). Lewis eventually turned her whole house into a work of art and it is now part of the Art Gallery of Nova Scotia. 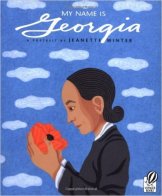 Georgia O’Keefe followed a unique, sometimes controversial, path to becoming one of America’s greatest painters. Her relationship with the famous photographer Alfred Stieglitz is, perhaps, too complicated for young readers. Two picture books, however, do a good job of showing how Georgia saw the world and what motivated her to follow her own path. Originally published in 1998, My Name is Georgia by Jeanette Winter, was a Publishers Weekly Best Book of 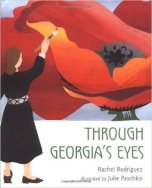 the Year and made the New York Public Library’s “100 Titles for Reading and Sharing.” Through Georgia’s Eyes by Rachel Rodriguez and illustrated by Julie Paschkis also focuses on how Georgia saw the world. The illustrations are beautiful and the book’s goal is to convey Georgia’s “singular perspective as a woman artist in her time.”

Me, Frida, written by Amy Novesky and illustrated by Caldecott Medalist David Diaz, is one of many books about artistic pioneer Frida Kahlo. What I like about this book is that it focuses on Frida’s time in San Francisco. This is where she found her inspiration to step out and find fame on her own, sepa

rate from the shadow of her husband and mentor, Diego Rivera. The book shows Frida and Diego exploring the city. How familiar is this: he  expresses an opinion; Frida disagrees? When the couple explore towering redwood groves Diego feels empowered; Frida falls asleep. Gradually, she explores the city on her own, focusing on the things that appeal to her. There is a great illustration where, out of the blue, Frida starts to sing Mexican songs at a party to honor Diego. That night, she painted a picture that made her famous. It was a portrait of her and Diego. As in life, he was big and she was small. However, in the portrait, in a ribbon in the beak of a bird, she puts her name first. Unlike many other children’s books on Kahlo (which, overall, give more information about her life and art), Me, Frida recognizes the significance of this step. In the story it occurs in a context in which its meaning makes sense.  Estupendo!

Mary Cassatt: Family Pictures (Smart About Art) by Jane O’Connor and illustrated by Jennifer Kalis is a fun read. It takes the form of a school report by “Claire” who has such wonderful observations as:

“I thought that Mary would be a shy, gentle person. Wrong again! Mary had a bad temper and an opinion on everything. During dinner parties, if her guests said something she disagreed with, she’d bang her fists on the table.”

The book has a lot of information about Cassatt and contains paintings she did as well as paintings that influenced her. We find out that Cassatt did few paintings of men because, back then, it was not respectable for a single woman to use men as models. Despite a 40 year friendship with Edgar Degas we find that they never married. It intrigues “Claire” that, before she died, Cassatt burned all the letters Degas had written her. Overall, the book shows that even in the 1800’s women could be independent; it shows that Mary wanted nothing more than to be a great artist and, by golly, that is what she became.

Finally, how about a book about a woman who writes and illustrates books? The Scraps Book: Notes From a Colorful Life is both by and about Lois Ehlert, one of the most gifted picture book makers of our time. It is incredibly colorful, has many craft lessons for readers, and shows what it is like to be an artist. It addresses where inspiration comes from. I especially liked the time when Ehlert’s sister’s cat brushed her ankles. No spoilers here, but I recommend reading the page where she shows two versions of the story that grew out of that incident. Ehlert is a recipient of the Eric Carle Museum of Picture Book Art Artist Award for lifelong innovation in the field of children’s books. What a role model for an aspiring young artist.

These books will stick with young readers and engage their imagination. Check them out in the library, your favorite bookseller, or through the links above.

Ted Macaluso is the author of Vincent, Theo and the Fox, an adventure story for kids based on the paintings of Vincent van Gogh. Born in Brooklyn, he was a successful researcher on child nutrition and hunger before turning full-time to writing. He now lives in Reston, Virginia with his wife, kind hearted dog, and temperamental word processor. His son is in college. Find out more at tedmacaluso.com.

© 2016 by Ted Macaluso. May be freely copied provided attribution and a link to http://www.tedmacaluso.com is included.