Children’s biographies of famous painters teach about an artist’s work and life. A few books go beyond that and use an artist’s life as a way to convey deeper lessons and virtues.

Stories of courage, compassion, standing up for oneself, choosing a path in life, or overcoming adversity are important for children. Finding those themes in the context of the arts gives the readers of such books an experience that goes beyond facts and inspires them to think about their own life choices.

Here are six books that can both educate and inspire young readers (uses affiliate links). 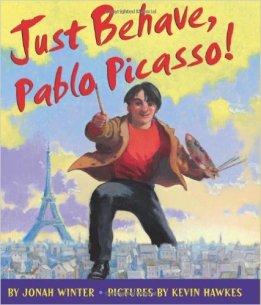 Themes: Courage; Standing up to Mean Comments. At one level, Just Behave, Pablo Picasso! by Jonah Winter (author) and Kevin Hawkes (illustrator) is about Picasso’s life and artistic evolution. At a deeper level, the book is about courage in the face of doubt; about the exuberance for life that helped make Picasso one of the prominent painters of the twentieth century. Winter turns Picasso’s life into a drama (rather than a mere retelling of biography). By doing that, the story reaches into the heart of every child who is told to “just behave,” of every child who needs to find the inner strength to pursue a dream in the face of harsh criticism. The illustrations reinforce the drama of the story. The book starts with a peaceful landscape. But, turn the page, and a young Picasso is bursting through that same canvas. When art dealers tell Picasso his new work is terrible and ask why he is abandoning prior styles that made money, Picasso “expands himself to a height of one hundred feet” and shouts, “The chief enemy of creativity is ‘good sense!’” What a marvelous way to relate to the intense feelings of children. Readers feel what it means to resist the judgments of peers and forge one’s own path.

Themes: Compassion; Bonds Forged by Fathers and Sons. Camille and the Sunflowers by Laurence Anholt is based on a true story in Vincent van Gogh’s life. The book recounts how Camille and his father, the postman Roulin, help van Gogh when he was a poor stranger arriving in town. The father models good behavior and Camille becomes friends with van Gogh, despite area children who tease the artist. When Camille feels helpless, because he cannot defend his new friend, his father helps him. Camille learns compassion and hope from his father and from his friendship with van Gogh. The book is about the facts of van Gogh’s life but it is also about a boy learning what compassion means.

Themes: Perseverance, Overcoming Disability. In Capturing Joy – The Story of Maud Lewis, written by Jo Ellen Bogart and illustrated by Mark Lang, children learn about a Canadian painter who, through force of will, created images of joy despite a hard life. The details of Lewis’ life are fascinating, but the book is really about the artist’s self-determination. Lewis was born with several birth defects, had rheumatoid arthritis, and was dirt poor. Her husband was a fish peddler and they lived in a house without electricity and indoor plumbing. Despite these challenges, she persevered, and became famous slowly, over time (rather than suddenly–another good lesson for today’s children). Lewis’ house—which she turned into a work of art—is now a part of the Art Gallery of Nova Scotia. In addition to illustrating what self-determination means, the book introduces children to a less known female artist and to folk art.

Themes: Growing Up, Learning from Failure.  Vincent, Theo and the Fox is written by Ted Macaluso (full disclosure, that’s me) and illustrated by Vincent van Gogh. The book is a fable about van Gogh’s life that addresses growing up and figuring out what one wants to do in life. We all know that van Gogh became a painter, but he didn’t go there directly, trying a number of different jobs first. So as a boy in a story there is wonder and mystery when Vincent thinks about growing up. In the story, the fox was young too—he was also trying to grow up and find his way in the world. So the book has two boys and a fox thinking about growing up and through their actions teaching each other about what to do in the face of failure and, eventually, success. Full-color reproductions of 30 van Gogh masterpieces illustrate the story. A brief, factual biography of van Gogh ties the events in the story to van Gogh’s life. 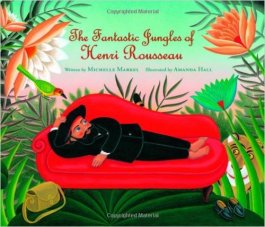 Theme: It’s Never Too Late to Pursue your Dream. At first, one might think that the story of a toll-collector who didn’t start painting until he was 40 years old, would hold little interest for a child. But the lesson–just because you haven’t started, it doesn’t mean you can’t still do it—applies to every age, especially children who procrastinate over homework or have self-doubt. In The Fantastic Jungles of Henri Rousseau, written by Michelle Markel and illustrated by Amanda Hale, we learn that “not a single person has ever told him he is talented.” But Rousseau wants to paint anyway. “Why? Because he loves nature.” And so he does. Teaching himself, mocked by experts, doing it over and over again, until—like The Little Engine That Could—he succeeds. One of my favorite parts of the book comes when Henri is 61. He is too poor to ever travel to a real jungle. And then we read, “It doesn’t matter—he sees one before him. Clear as day.” The story tells the facts of Rousseau’s life in a way that can inspire children to appreciate art and to pursue their dreams.

Theme: Inspiration Strikes When You Least Expect: Listen to It, Believe in Yourself. Langston Hughes was a poet, not a painter, but Langston’s Train Ride, written by Robert Burleigh and illustrated by Leonard Jenkins, enables readers to experience the magic moment, that single instant, when inspiration comes. The story starts at a moment of success in Hughes’ life and flashes back to his youth, when he was riding a train to Mexico to meet his father “who left us to fend for ourselves when I was just a little boy.” As the train crosses the Mississippi, three words come to Langston, “I’ve known rivers.” From that, comes one of the first poems that made Hughes famous. The magic of this book is that the writing and the pictures combine so that readers experience the train ride, the buildup of thoughts that led to the words, and how Hughes captured them and expanded upon them. The book teaches facts about Hughes’ life but draws readers in to experience the creative process and how one learns to believe in oneself.

Books that go beyond the facts of an artist’s biography to address important themes about life are ones that stick with young readers and engage their imagination. The books above are just a start. If you want to suggest others, please add them in a comment, below. I would love to hear from you. And always encourage your child to read.

Ted Macaluso writes books for kids that make art more fun. Born in Brooklyn, he was a successful researcher on child nutrition and hunger before turning full-time to writing. The author of Vincent, Theo and the Fox, he now lives in Reston, Virginia with his wife, son, and kind hearted dog. Find out more at tedmacaluso.com.

© 2016 by Ted Macaluso. May be freely reproduced but please include attribution back to tedmacaluso.com.