“Don’t be a copycat,” people say. Teachers warn students not to plagiarize. But have you ever said something and later thought you could have said it better? Vincent van Gogh would repeat his paintings. Today, we look at one of them and ask what it tells us about creativity. 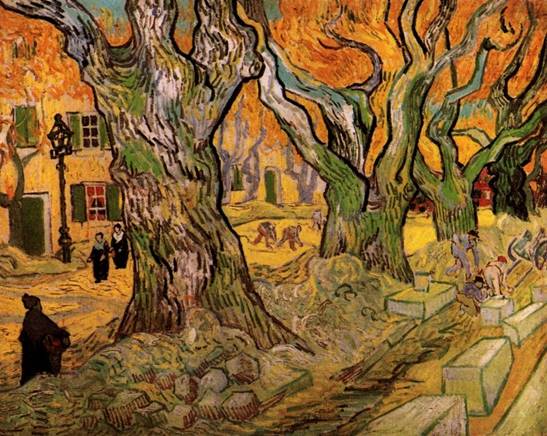 I had the good fortune to visit The Phillips Collection in Washington, D.C. two days ago. The Road Menders (above) is in their permanent collection. It is also one of the paintings used to illustrate my children’s book, Vincent, Theo and the Fox.

There are two versions of the painting: the one in the Phillips Collection and another (below), titled The Large Plane Trees (Road Menders at Saint-Remy), held in the Cleveland Museum of Art. 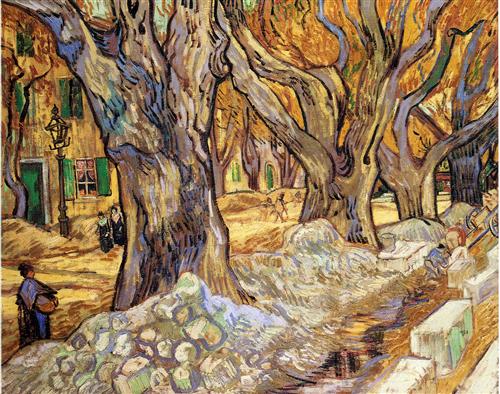 In 2013, the Phillips Collection brought the two paintings together for Van Gogh Repetitions, an exhibition that included 13 examples of van Gogh’s penchant to sometimes re-do his paintings.

Art teachers in prior centuries believed that making copies of artworks was a valuable practice in learning art. Later, the idea of copying fell into disfavor in some circles. It was felt that an artistic genius should capture and express the original; should make an “authentic” representation or gesture of the subject; not focus on the mundane practice of, eww!, copying. Besides, the thought went, while an original is “imaginative,” a copy borders on being a fake–and a copy can come dangerously close to plagiarism.

Van Gogh’s repetitions, therefore, did not receive serious comparative study for some years. The exhibition at the Phillips Collection used modern techniques, like x-ray analysis, to establish that the version held by the Cleveland Museum came first (for example, x-rays show erasures and changes underneath the top-level paint in The Large Plane Trees; these are not present in The Road Menders). Visual analysis shows that the version held by the Phillips Collection features smoother brush strokes. There’s more. Henry Adams, in an excellent New York Times article, Seeing Double: Van Gogh the Tweaker, interviewed one of the exhibition’s curators, William Robinson. While the two paintings are very similar, Robinson points out that in The Road Menders van Gogh moved the street lamp for artistic effect, added more lines to the trees, and included an extra person digging. You can find other differences between the two images if you examine them closely, above.

Why did van Gogh “copy” his paintings? In a letter to his brother, Theo, van Gogh said that the repetitions were an opportunity to improve and clarify. Adams’ Seeing Double article further explains that, when working outdoors, van Gogh would be beset by gawking onlookers and the light would change. It was in the studio, van Gogh told Theo, that “he could transform a painting from a direct transcription of a scene into a true work of the imagination.” Take that, anti-copy purists!

Repetition is also modern. Using these two paintings, Michael Lobel, a professor of art history at Purchase College, S.U.N.Y., addressed van Gogh’s “contemporaneity” in an article in the May 2014 issue of Art in America magazine. Van Gogh remains relevant to the modern art world, he says, because his embrace of repetition lets us perceive him:

as an artist who understood the modern condition of the image as repeating and repeatable and subject to extensive circulation in the form of reproductions….this version of van Gogh is more compatible with the artistic outlook of our own time, in which the strategy of appropriation has become a central device in the artist’s toolkit.

Barbara J. King, Chancellor Professor of Anthropology at the College of William and Mary, makes an additional observation. In her NPR Cosmos & Culture blog, Van Gogh Teaches Us How To Keep Life Interesting, she points out that  copying as a way to perfect artistic technique is not unusual  (musicians, for example, practice many hours every day). King’s insight is that van Gogh’s repetitions are not about copying or practicing in any conventional sense. Instead, she points out that van Gogh’s repetitions are about looking at one’s finished, visible-to-the-public product and deciding to do it again, almost the same, but not quite.

I agree with King. Creative repetition gives incredible freedom and growth. Live concerts are exciting because each performance is slightly different. Rather than getting caught up in perfectionism, in worrying about whether one’s so-called finished product is good or bad, we would do well to heed King’s NPR blog post. She highlights the lesson van Gogh teaches us with his repetitions: “embrace and take delight in an iterative process…you can appreciate what happens when a new mosaic of meaning emerges from the previous one.” As ’70s rock band Steely Dan sings and (for fellow jazz lovers) the more recent Philipe Saisse Trio plays, Do It Again.

How is The Road Menders used in Vincent, Theo and the Fox? The book is an adventure story that introduces children 4 – 8 to van Gogh’s paintings in a fun, exciting way. The tale starts with young Vincent and Theo trying to catch a fox. After the young boys have finished chasing the animal, they reflect on how the fox tried and failed at different activities before finding happiness. Vincent thinks he too will try different things as he grows up. One is to be a road mender. Today’s painting illustrates that thought. If you haven’t seen the book yet, you can check it out here.

© 2016 by Ted Macaluso. May be freely reproduced provided you include attribution back to http://www.tedmacaluso.com.